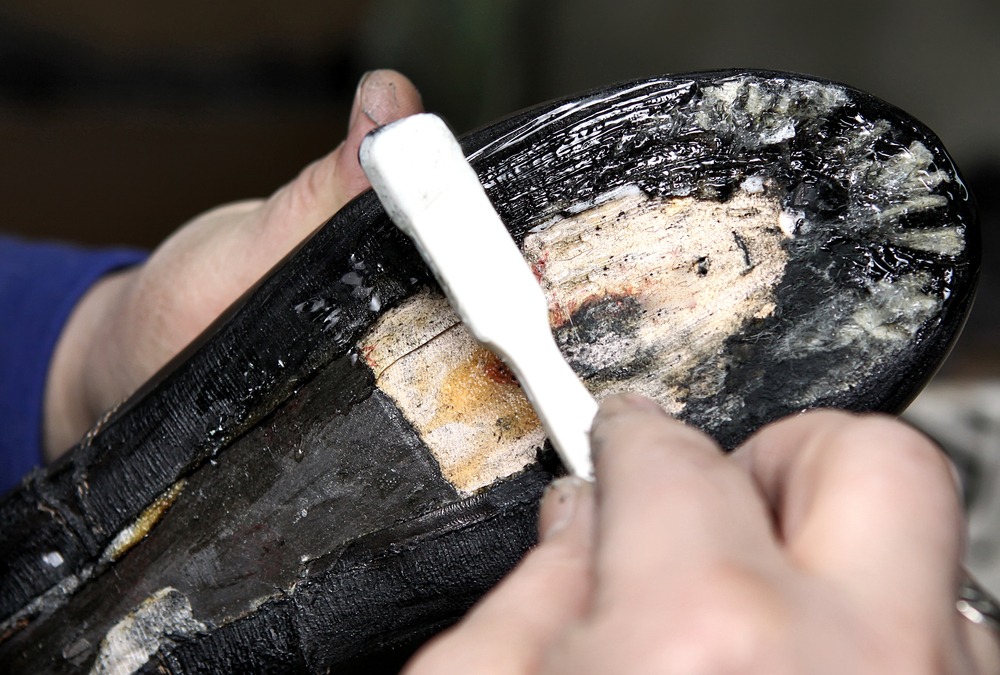 Learn about the Shoe Business

Aspiring shoemakers start here! How Shoes are Made is your entry into the world of modern shoe making. Tour a real shoe factory and learn the process from design to manufacturing.
Learn more
Download $19.99 Board Lasted Construction:  A very common shoe construction technique that can be made by machine or by hand. The upper is pulled tight and bonded to a fiber board. The outsole unit is firmly cemented to the upper, securing the upper to the sole. Board lasting construction can be used on almost any style of shoe, being suitable for many upper material types and outsole styles. Strobel Construction:  Used for most athletic shoes, Strobel requires the upper material to be sewn to a fabric bottom creating a “sock.” The upper and bottom are joined by a Strobel stitch, using a Strobel machine. With the upper sock tightly lasted, the upper is cemented to the outsole completing the shoe. Blake/Rapid Construction: Similar to the standard Blake construction, but with a “rapid” perimeter stitch attaching the outsole. The outsole covers the Blake stitching. This allows for a thicker sole and is easier to resole. The extra layer can be rubber, making the shoe more durable. Goodyear Welt Construction: The Goodyear welt is often used to make waterproof soles, the stitch that attaches the sole to the shoe runs around the outside edge and does not make stitch holes in the upper. The upper is sewn to the welts that attach to the insole and the outsole. During assembly, the welts are attached first by a horizontal “Goodyear” stitch, named for the inventor of the stitching machine, Charles Goodyear Jr. (also the son of the famous rubber inventor, Charles Goodyear Sr.).  The Goodyear welt construction method is ideal for heavy-duty boots for hiking or service. Norwegian Storm Welt Construction: Similar to the Goodyear welt construction method but the upper is turned outside and is sandwiched between the outer welt and the outsole. Used to make the heaviest waterproof boots, the Norwegian Storm Welt is difficult to make and is found almost exclusively in the workshops of Italian bootmakers. Bologna Construction: Developed in Italy and used primarily for dress or fashion shoes, the Bologna construction creates a smooth, comfortable shoe. The shoe lining is joined into a sock fitting the last tightly. The leather upper is then attached to the sole via the Blake stitching method. The Bologna shoe construction method is ideal for making very clean looking and flexible shoes.

Created for footwear beginners and career changers alike, this course delivers the basic shoemaking knowledge you need to get you career in the shoe trades started.
Learn more
On sale $99

A must-have for anyone serious about launching a footwear company. 4 text books, shoe business documents and downloadable content not available anywhere else! The Shoe Company Start-Up Pro Pack bundle is all you need to get your shoe business off the ground.
Learn more
Download Today
PrevPreviousHow New Balance Shoes are Made
NextFootwear Mold Making Factory TourNext